And now for something totally unrelated to writing...

Last Friday, Old Dog and I drove to Cleveland to meet and, as it turned out, adopt a one-year-old Australian shepherd named Kai (pronounced to rhyme with the last syllable of bonsai).

Here's a picture of Kai lying outside the bathroom in our back hallway: 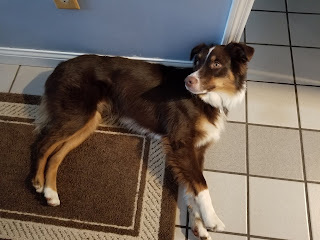 If you're a dog person, you're probably wondering why anyone would give up such a beautiful dog.

His original family had a couple of small children and two Aussies. At some point last summer they decided that was all just too much, so they gave the dogs up for adoption.

So far, he's been a mixed bag of joy and frustration/anxiety--but with a definite bent toward joy.

After the first of the year, Kai and I will start obedience training, with the intention of moving on into agility work or nose work once he's mastered the basics of good doggy behavior.

If anyone has any suggestions around taking a very active, very bright dog who was never properly socialized as a puppy and turning him into a good canine citizen, I'm all ears!
Posted by Jeanne Estridge at 9:16 AM