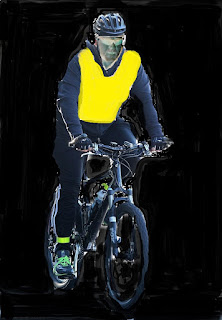 (Not actual Bicycle Guy. This is why I don't usually attempt to Photoshop anything.)

During the week, I get up at 4:30 a.m. and make my way to the gym three miles up the road. (Yes, I know this sounds crazy, but I also go to bed at 9:30 p.m. Which only sucks in the summertime, when you can hear kids still out playing.)

Many mornings, as I'm heading to the gym, I see a guy on a bicycle heading toward My Little Town. It's always dark--even at the solstice, the sun doesn't rise here till 6:08 a.m.--but there he is, pedaling his heart out, making his way toward work or school or wherever he's going.

This is impressive in summer, but in winter it rises to the level of inspiring. The past couple of winters have been brutal, with lows well below zero (Farenheit) for days at a stretch and lots of ice and snow. And through the worst of it, I'd see him.

I have no idea what he looks like. I have the impression that he's young (in his 20's maybe) and African-American, because the flash of my headlights swooping across his shadowy figure reflects back dark skin, but that may be a trick of the no-light.

Some of you are probably thinking, "Bicycle Guy is crazy," and he may be. I don't know his story. Maybe he doesn't have a car. Maybe the bus doesn't run that early in his part of town. Maybe he's getting ready for the Tour de France. I don't know.

All I know is, Bicycle Guy inspires me. There's something he wants to achieve, whether it's a competition or staying in good shape or simply being on time for work, and he's committed to it. So every morning when I pass him, I send a little prayer out into the universe, asking for his safety and protection.

Because my world would be a sadder, smaller place without him.


Posted by Jeanne Estridge at 7:13 AM