I posted this on Facebook this afternoon but, apparently, it's still not out of my system so I'm going to post it here, too. 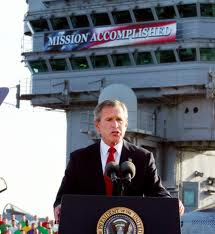 Last winter some friends told me that the battle for gay rights was essentially won, and maybe I should find a new cause. Yesterday's hate-fest at Chick-Fil-A stores around the country tells me it may be a little soon to put on my flight suit and hang my "Mission Accomplished" banner.

To disagree with someone does not mean that you hate them, but to deny them basic human rights, like the ability to marry the person they love, to be at their partner's bedside when death draws near, to keep they children they raised together after a partner dies--that does.

Please don't tell me you love my child and then put your time, your energy, your money behind those who would persecute her. Because I'm going to judge your intentions not by your words, but by your actions.

And if I were to choose some stray trait that your child has--that his hair is blond, or she was slow to learn to read, or his third left toe is crooked--and decide that this justifies treating them with less respect and dignity than other American citizens receive, I'm pretty sure you'd feel the same.

Note to Dan Cathy, Mike Huckabee and their supporters around the country: when you can look me in the eye and tell me you follow every letter of the law as written in the Old Testament, we can talk about how you're just following God's will. Till then, I'm going to assume this has nothing to do with God, and you're just using the Bible as cover for your homophobia.
Posted by Jeanne Estridge at 8:14 PM