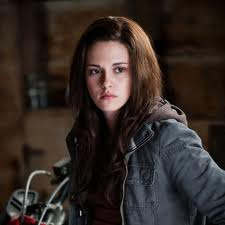 (Note: It's come to my attention that after my last, over-the-top post, people are concerned that I totally flipped out and had to be institutionalized. Nope. Just crazy busy working on a new book while simultaneously pursuing my Twilight obsession analysis.)

I've heard Bella Swan called a great character, a cipher and the worst role model for teenage girls ever written.

Okay, so that's pretty broad. How can that be?

o She's (apparently) beautiful, but she's unaware of her own beauty
o She's altruistic, but she's also capable of great selfishness (i.e. in the way she treats Jake)
o She's flawed (clumsy, stubborn)
o She's honorable (she keeps her word to Edward even when he fails to keep his to her) but she's sulky about it
o She's simultaneously impossible to read/easy to read

So, she's nuanced, with the contradictory layers of a great character.

The argument for cipher, on the other hand, goes:
o She's so altruistic she's self-negating.
o Compared to Buffy, the Vampire Slayer, Bella is a do-nothing, content to let the boys take care of her.
o She has no interests beyond her boyfriend(s).

My take is that Bella's lack of assertiveness lets us inhabit her in the same way that removing all your personal items from your living room and painting all your walls off-white allows prospective buyers to project inhabiting your home. If there's nothing there (other than her hot boyfriends) that make us want to be Bella, there's also nothing there that makes us think we'd NEVER want to be Bella. Because, if we lived in that house, we could have all the good stuff AND choose to DO something to liven it up.

The point about being "the worst role model for teen-aged girls ever written" also has some validity.
o Bella takes man-dependent to a whole new level. When Edward dumps her, she becomes clinically depressed, a depression that only begins to lighten when she gets involved with Jake.
o She gets married straight out of high school.
o Despite the very real dangers of pregnancy (like, it could kill her), she doesn't use contraception. (Nope, not even going there. We all know how I feel about that.)
o She has no interests beyond her boyfriend(s). Although, in fairness, she spends all four books in mortal danger most of the time, which probably absorbs a lot of her energy.

From a literary aspect, though, because a character is a poor role model doesn't necessarily mean they're a poor character. I don't think any of us want our daughters to grow up to be just like Scarlett O'Hara, either.

So, Bella Swan: great character or sucky character who happens to land at a really great intersection? What do you think?
Posted by Jeanne Estridge at 7:41 PM