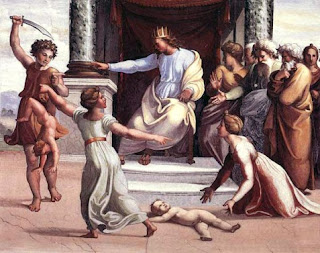 In the world of negotiation/gamesmanship, a "lumpy good" is something over which people are unwilling/unable to compromise.

One example we're all familiar with is Palestine. Neither side is willing to share the city. Each feels that if they don't win complete control of the geography, they've lost.

Another is Solomon's Baby. Well, not actually Solomon's baby, although, with 700 wives and 300 concubines, he must have had enough of them. This was the baby brought to him by two women, each claiming to be the child's mother. When each refused to give up her claim, Solomon proposed to slice the child down the middle and give each woman half. Upon which, the child's mother offered to renounce her claim for the good of the baby, thus identifying herself as the true mom.

As we discussed last week, the more intense the differences between our two lovers, the more tension/conflict/interest resides in the plot.

So I'm thinking, what could create more tension than a lumpy good?

From our examples last Friday, Dr. Abortion and Ms. Right-to-Life clash over a lumpy good, human life. There is no compromise position here. Either you ban abortion and let the fetuses live or you prioritize a woman's right to choose. No middle ground.

Likewise Bella and Edward clash over a lumpy good--her life or, arguably, her immortal soul.

What other lumpy goods can you think of in this context?

Next week: an analysis of the plotting in Twilight.
Posted by Jeanne Estridge at 6:27 AM